This shop has been compensated by Collective Bias, Inc. and its advertiser. All opinions are mine alone. #MMSFlavorVote #Walmart #CollectiveBias

Piña loca, which literally mean “crazy pineapple,” is a very popular snack in Mexico, and I am sure that you will love it too if  you like sweet, sour, and spicy all combined at the same time! 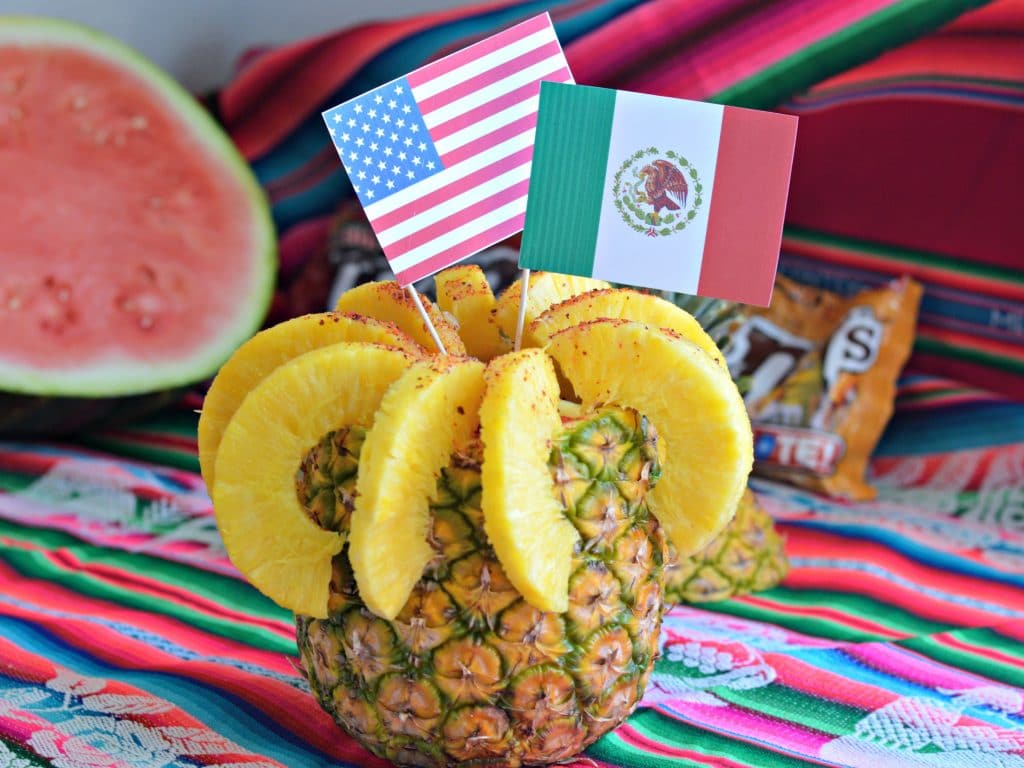 Piña loca is a perfect snack for hot days – the combination of fresh tropical fruits and vegetables like jicama, mango, watermelon, cucumber, and pineapple (of course), all combined together and put back into the pineapple “bowl,” this is sure to be a hit!

Not only is the piña loca popular, but the pepino (cucumber) loco and the sandia (watermelon) loca are fun too! They are exactly the same, except you use those fruits as the “bowl” instead of the pineapple! 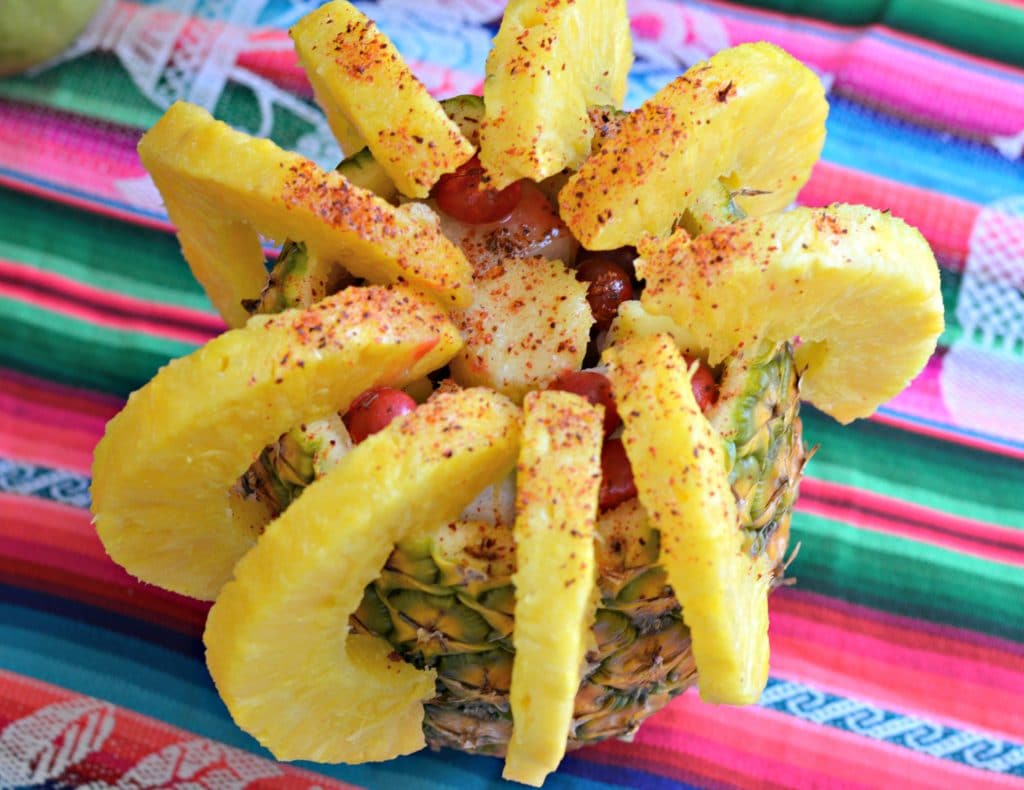 If there is one thing that almost all snack recipes in Mexico have in common, it is that they are spicy! Just walking down the road in Mexico, you will have no problem finding roasted corn, fruit, pork rinds, and even candy, all covered in a delicious, slightly sweet chili powder.

I am guessing that the tradition of eating spicy snacks is limited primarily to Mexico and maybe some other central and South American countries. I have come to this conclusion based on the fact that since arriving in the United States, I have had quite the time trying to find these spicy sweets!

I have gotten used to the snacks and sweets that are most common here in the United States, but of course I miss the flavors from Mexico sometimes too. That is why I was so excited when I heard that, in addition to M&M’s® Honey Nut and M&M’s® Coffee Nut, one of the three new  M&M’s® flavors that are part of the M&M’s® Flavor Vote, is M&M’s® Chili Nut. 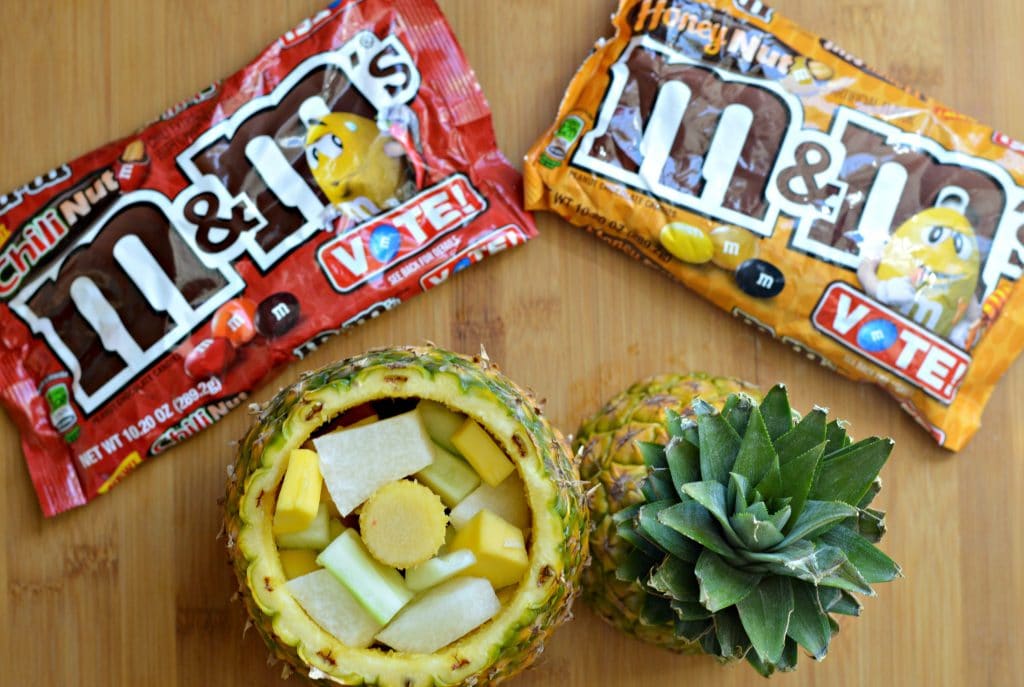 Usually the piña loca has some type of nuts with chili powder, so the M&M’s® Chili Nut flavor was a perfect addition to this recipe! 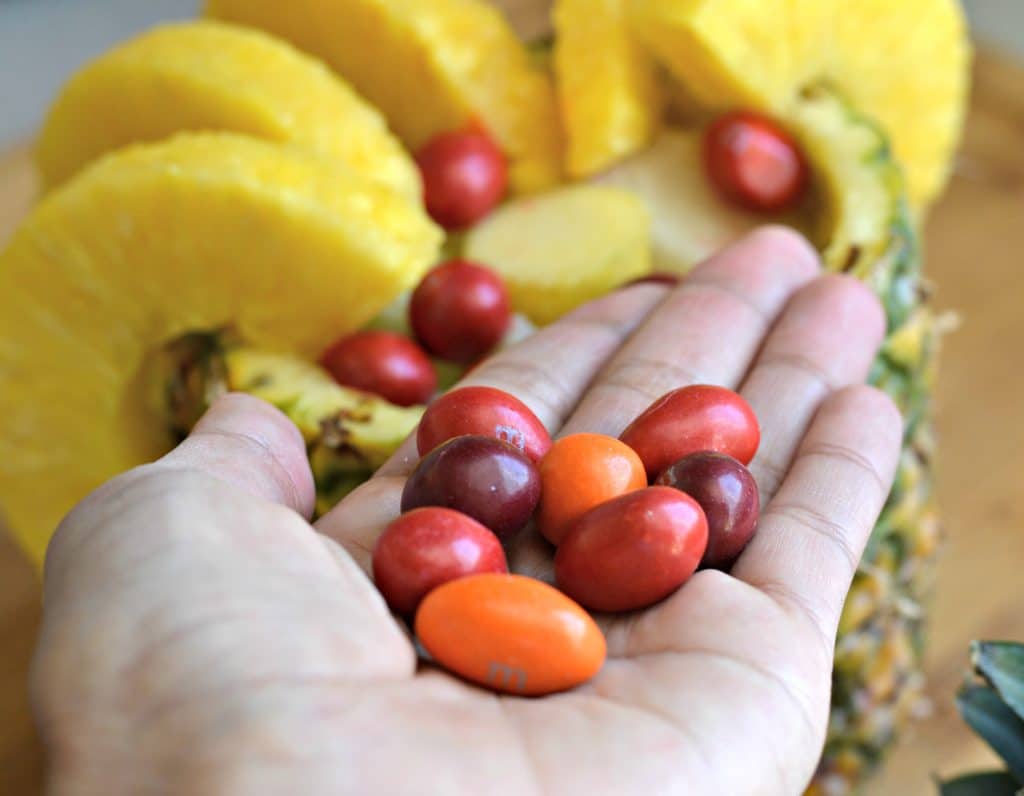 I loved this flavor! It is sweet because of the chocolate, but then at the very end you get an awesome kick of heat, which I love. I have to say that the M&M’s® Honey Nut flavor was  pretty good too! The only flavor that I didn’t get a chance to try was the M&M’s® Coffee Nut variety, because it was sold out at the Walmarts that I went to!

I was able to find the  M&M’s® Chili Nut and M&M’s® Honey Nut varieties on a special display at Walmart like the one below. I also heard that there were some demos too where they were letting people try all of the flavors! 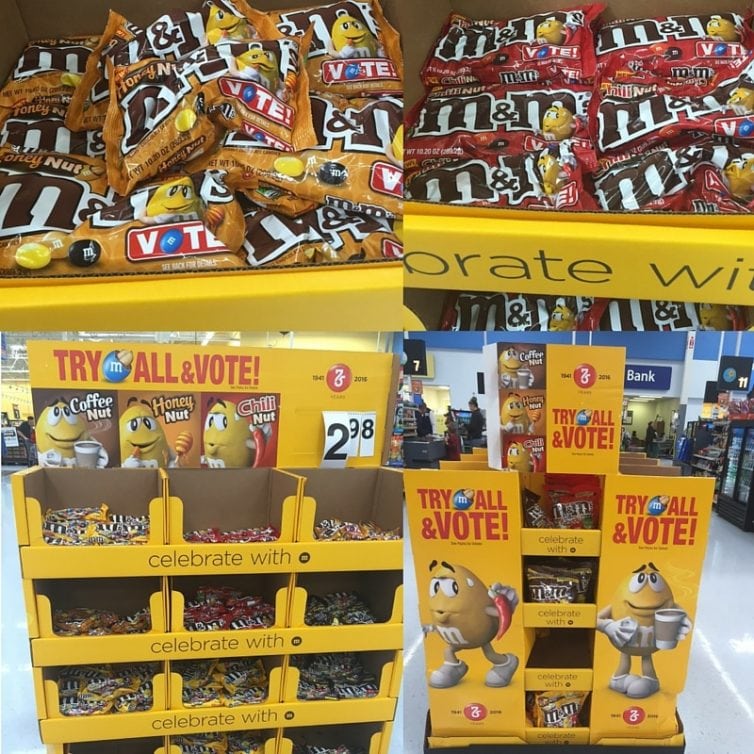 If any of these three varieties look good to you, then make sure that you go to the M&M’s® Flavor Vote page on Facebook to vote so that you can say, “I Voted,” like me :). When you vote, you can also enter for a chance to win $100,000 and the title of the official M&M’s® Taste Tester. You can vote once a day up through June 17th, so make sure your favorite flavor wins! 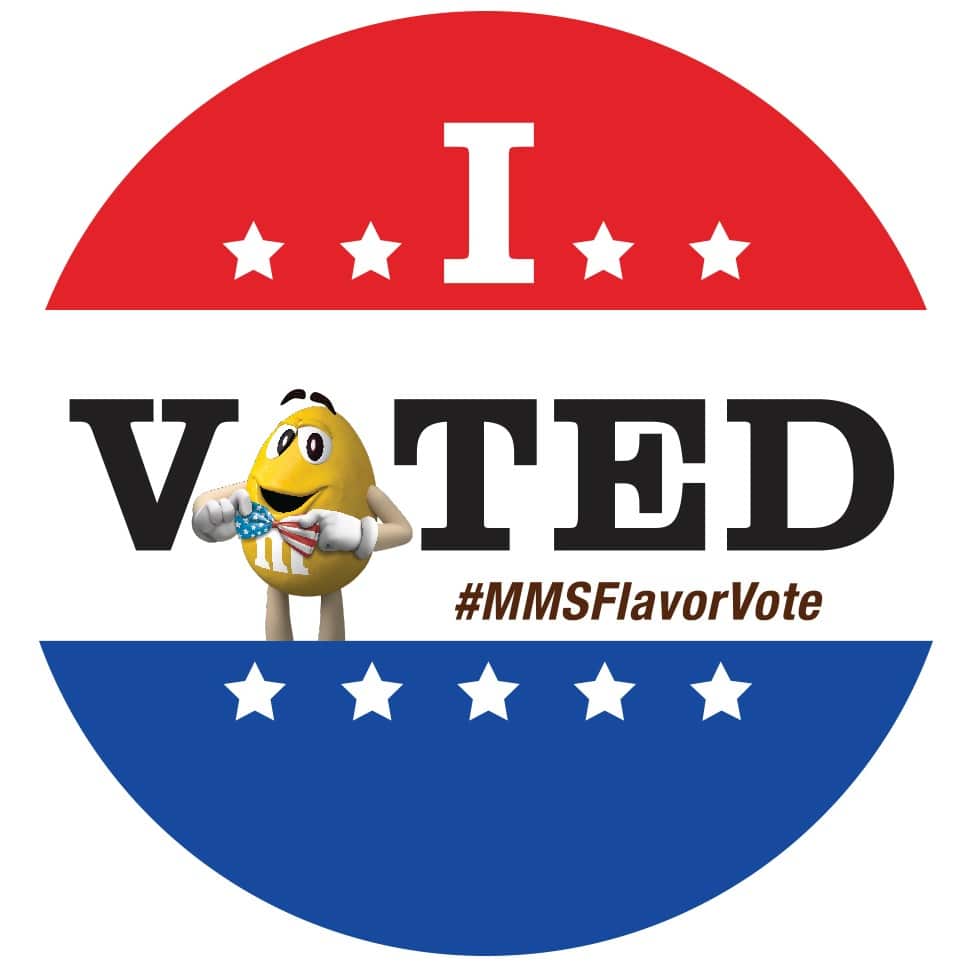 So now for the piña loca – it really is an easy recipe to make! Now, I understand that there are different tastes and traditions in different countries, and the idea of having chili powder on your fruit may be too strange for you.

This cultural difference was really brought to my mind one time that we were at my in-laws house and everyone else was dipping their apples in caramel sauce, and there I was, sprinkling chili powder on the apples at the same time. My husband and I both took a look at each other and couldn’t stop laughing! 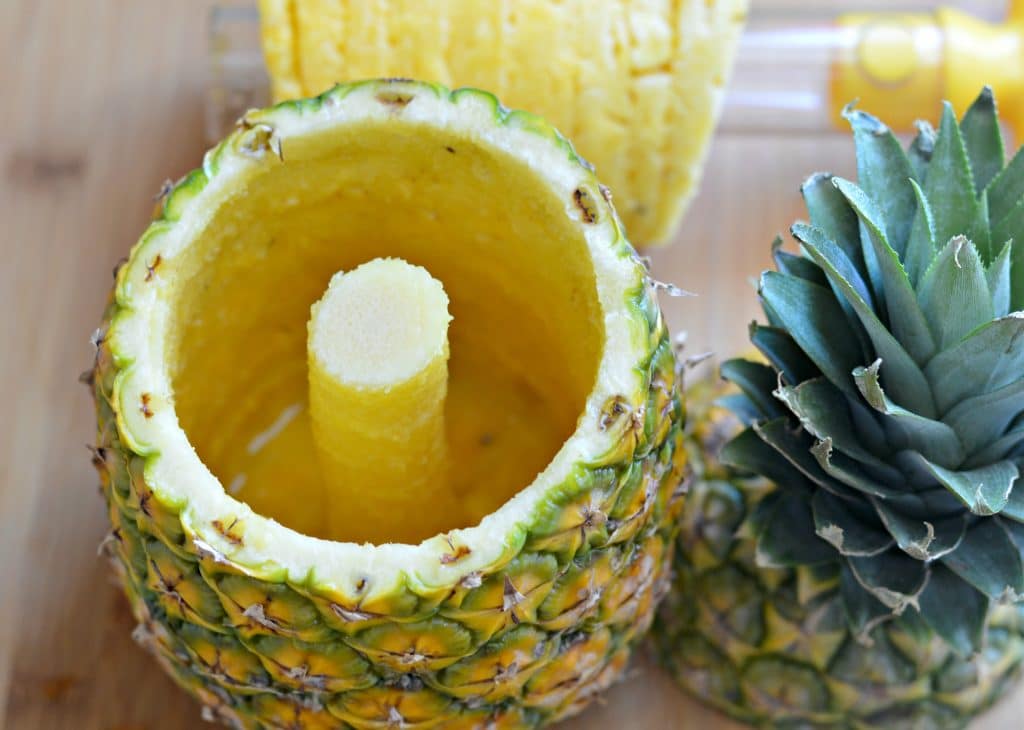 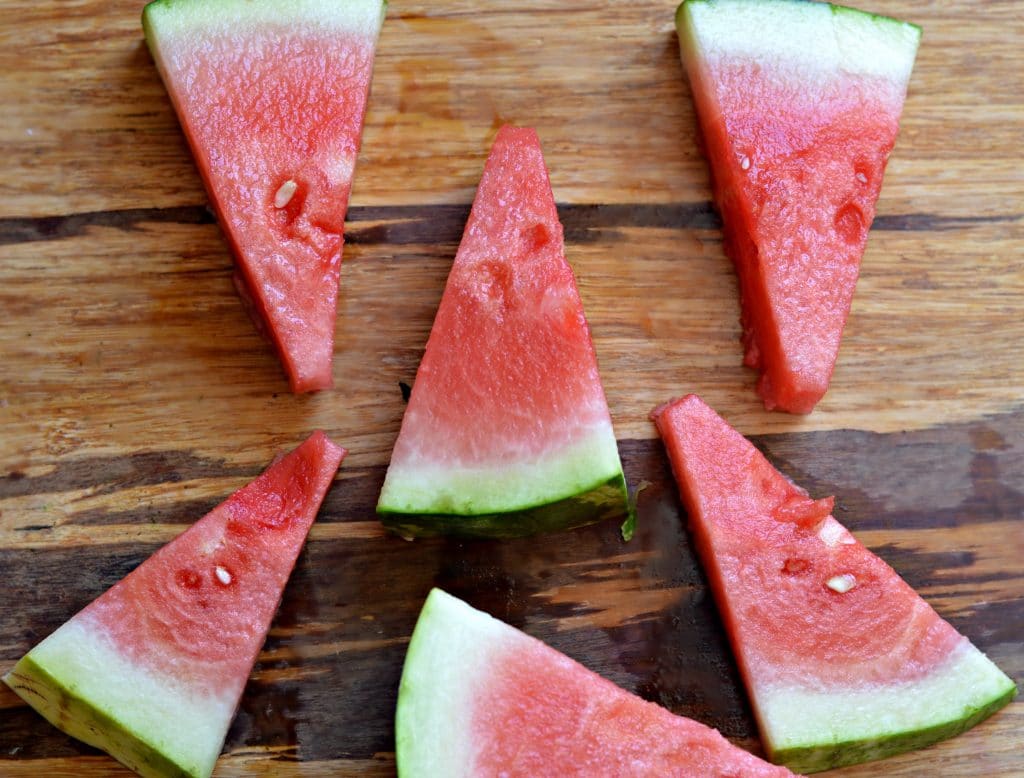 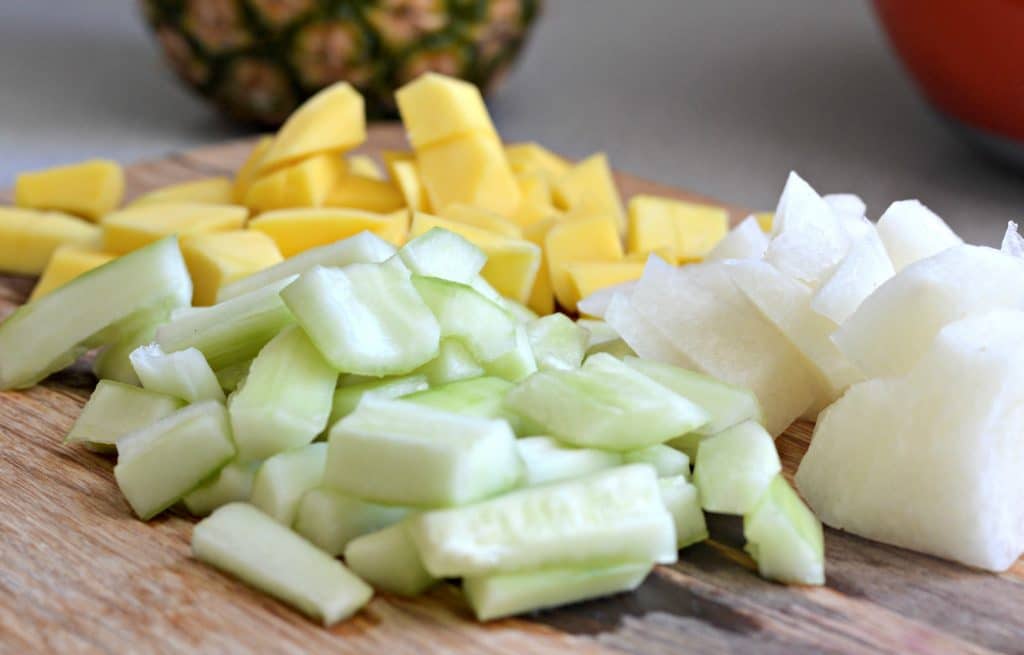 If you are the same and don’t want the chili powder, you can make this recipe, and just omit it and it will still be amazing! That said, I would encourage you to try it, because who knows? Maybe you will love it!

Let me know in the comments section below! 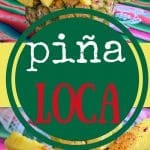 Save RecipeRecipe Saved! Print Recipe Pin Recipe Rate this Recipe
No ratings yet
Prevent your screen from going dark

I have never tried one of these before, but it looks amazing! (client)