A huge thank you to Chuck E Cheese’s for sponsoring this post. All opinions are my own.

We were excited to help plan a birthday party for my niece who was turning five this past week. Keep reading to see how it went and why having a party at Chuck E Cheese’s is such a great idea! 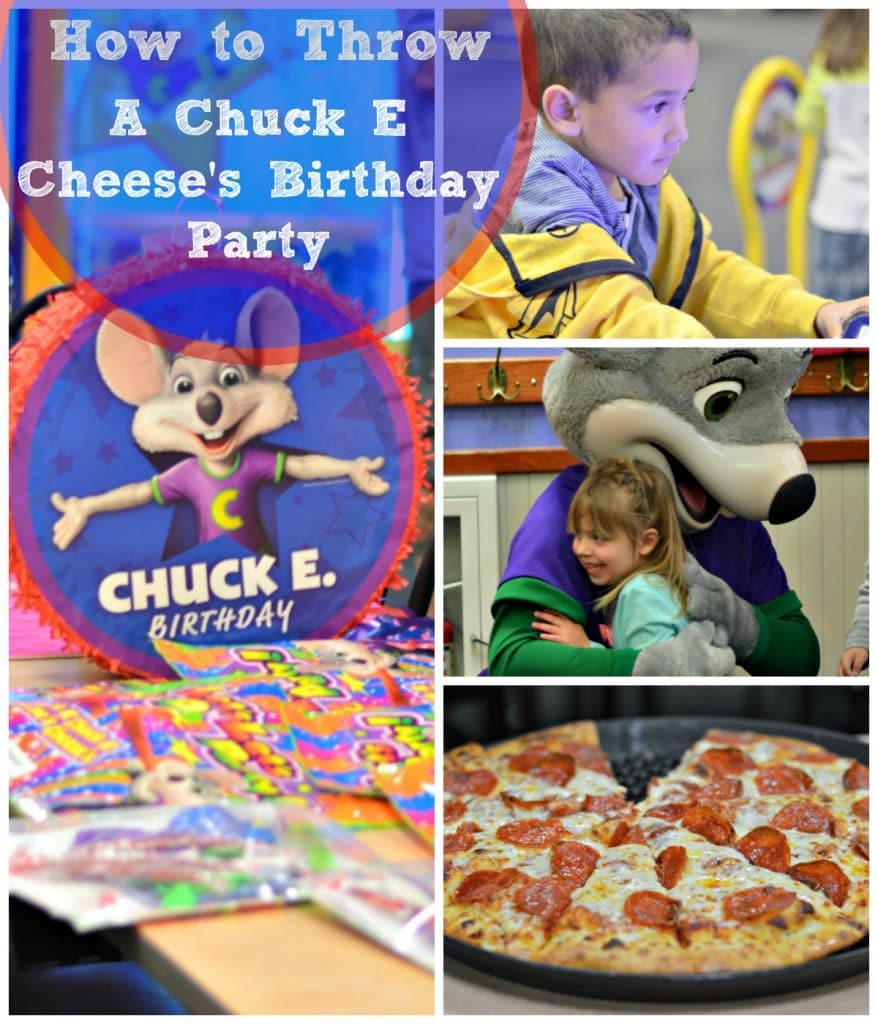 A couple of months ago my boys turned 6 and 3, respectively. We didn’t have a very elaborate party this year, but they definitely had a fun time. Shortly after their birthday, someone mentioned that they had had a great birthday party at Chuck E Cheese’s and how it was a great place for kids. She also mentioned that it had been such a great experience because there were some kids that spoke Spanish and others that spoke English. She said that Chuck E Cheese’s made it a great environment for a bilingual party and recommended it to me. Since I speak Spanish and my boys are learning too, I decided that I wanted to do a birthday party for my kids there too for their next birthday.

A couple of months passed by and we found out that my sister-in-law and her family were coming to visit for Thanksgiving. One of my nieces was going to turn 5 during the visit and her parents were trying to think of an idea for a birthday party that we could all go to. I suggested that they look into Chuck E Cheese’s. After looking through the options on this site together, we decided that it was a great value and would be perfect for all of the kids to play and have fun together!

Since we were a little bit more familiar with the website and the options, we offered to put it all together and get it planned. Fortunately, the Chuck E Cheese’s website makes it a breeze to plan a fun party. Right on the first page of their Birthday Party website, it gives you three birthday party options: Star, Super Star, and Mega Star. It has an easy to read table that tells you how much each package costs per child, and what each package includes. We decided to go for the Mega Star option, because it seemed like the best value for the money. You can see everything it includes in the link above, but we were pretty excited that it was going to include ice cream for all of the kids, a goodie bag for the kids, and two hours of unlimited games and rides (options vary by location).

It took us about 10 or 15 minutes to finish the reservation and we were able to pay the deposit online with no issues. Another great thing is that you pay by the kid, but you can invite adults as well without paying extra. The birthday package came with two slices of pizza for each kid, and we just decided to add on 4 large pizzas for the adults and some beverages. You can do that during the reservation process, which is very convenient.

So I know what you all really want to know is how the party turned out, right? Let me tell you – this party was a blast! Not only did the kids have fun, but the adults enjoyed it as well. We had chosen the princess theme for my little niece and she was more than excited! 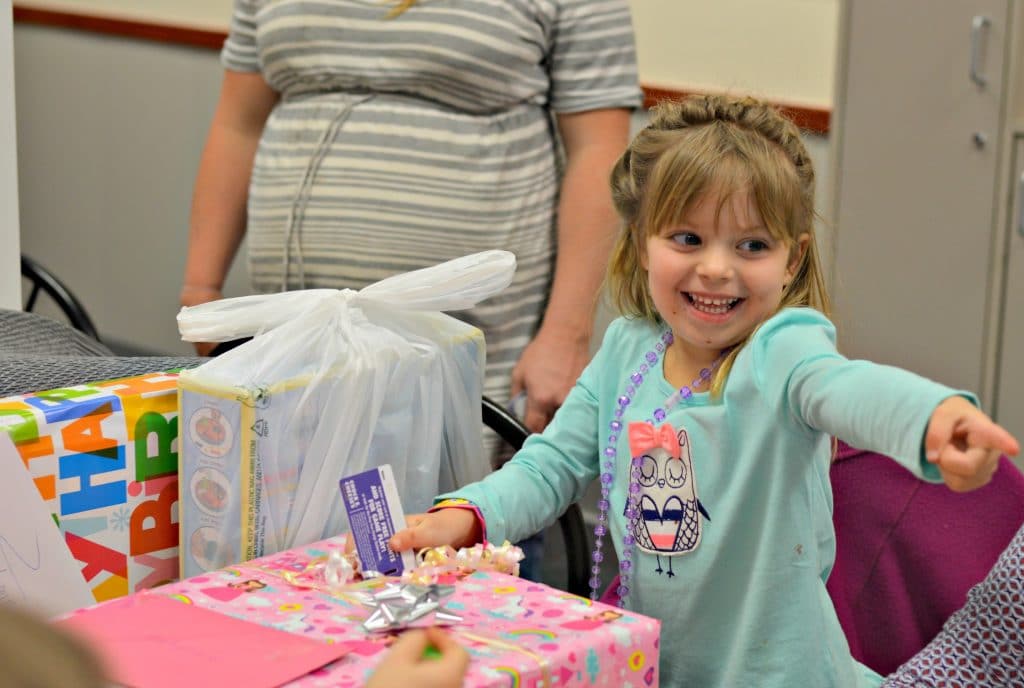 When we got there, they had the table ready for us with a piñata filled with tickets and a princess cut out for my niece to get her picture taken – she thought that was pretty fun! 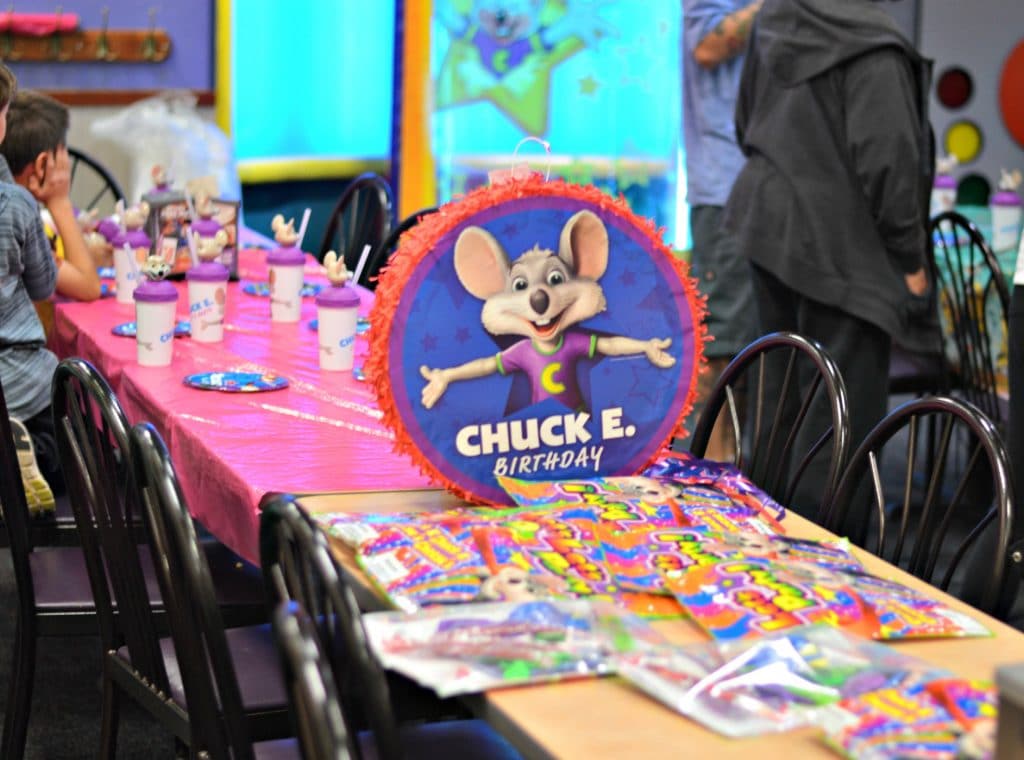 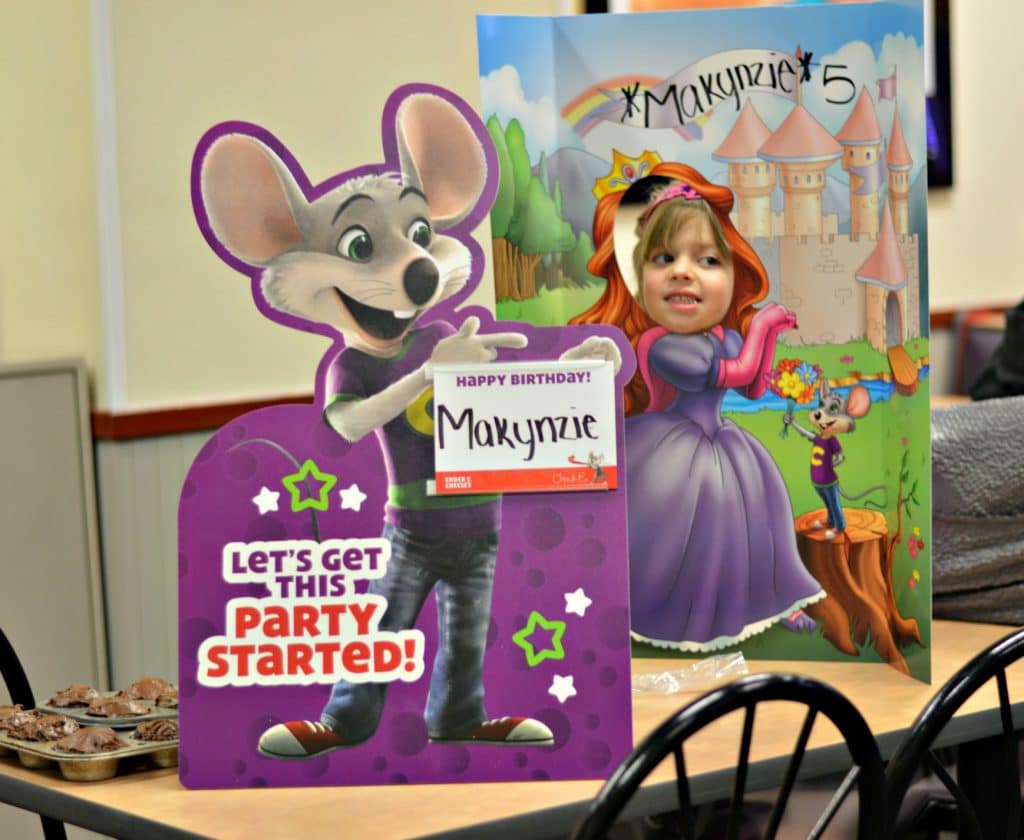 Right when we got to the table, we were greeted by our party host. She was so nice and helpful and told us exactly what to expect and what the timeline of the two hour party would look like. She confirmed our food order and gave us the passes for each of the kids that were pre-loaded with two hours of unlimited games and rides. TheChuck E Cheese’s location that we went to uses convenient tap cards instead of tokens for the games and rides. All the kids had to do was tap their cards on a ride to start the two hours. As you can tell, they had a blast! Here are my two boys on some of the rides. 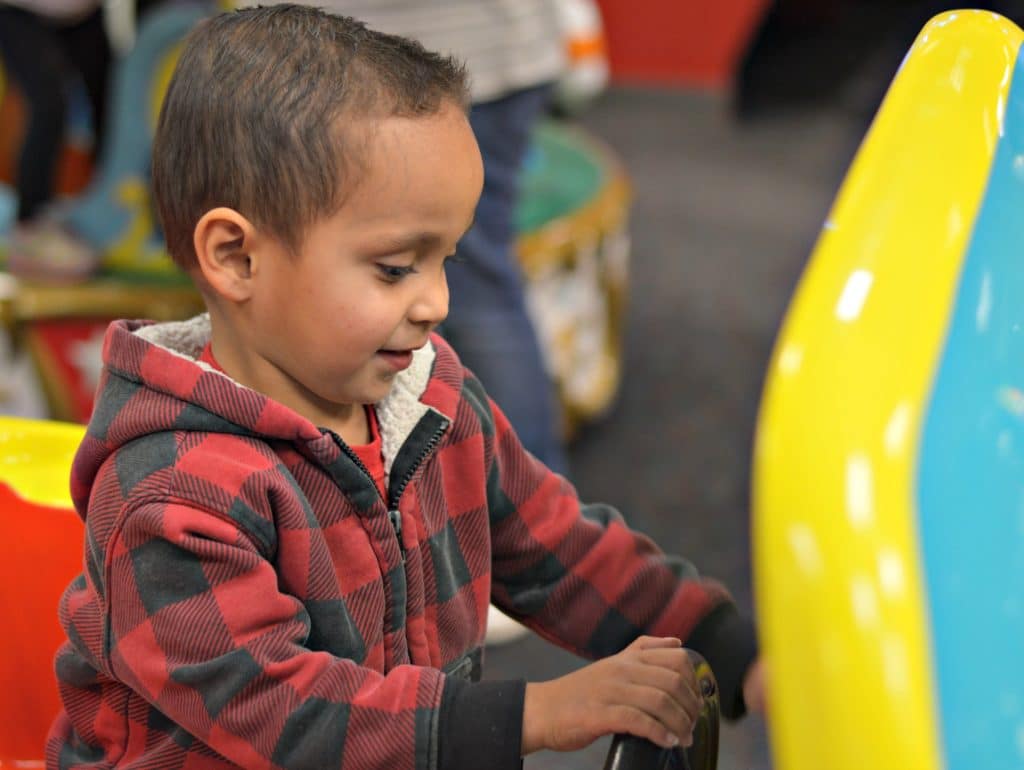 The food was great too! We were able to bring our own cupcakes, but we really enjoyed the Chuck E Cheese’s pizza – we ordered four larges for the adults, and it was plenty! 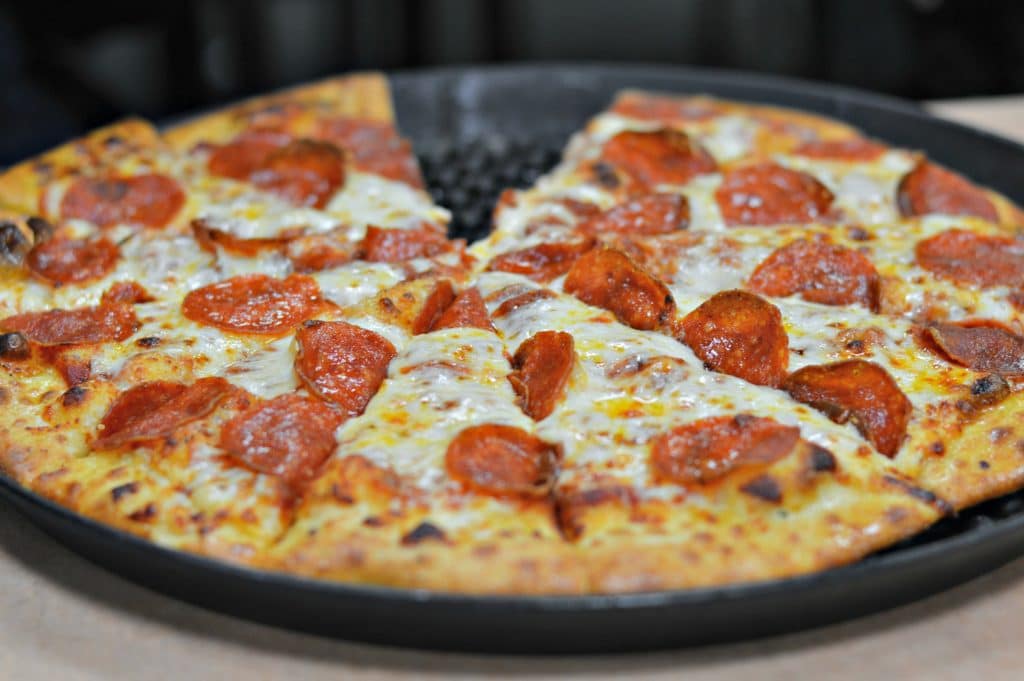 After we ate and the kids finished their first round of playing, we moved onto a few of the activities that came with the package. First, the birthday girl was able to enter the ticket blaster with one of her friends (she chose her big sister). The ticket blaster was so cool! They stood inside there and were given time to grab as many tickets as they could in that time period! They ended up getting SO many tickets. 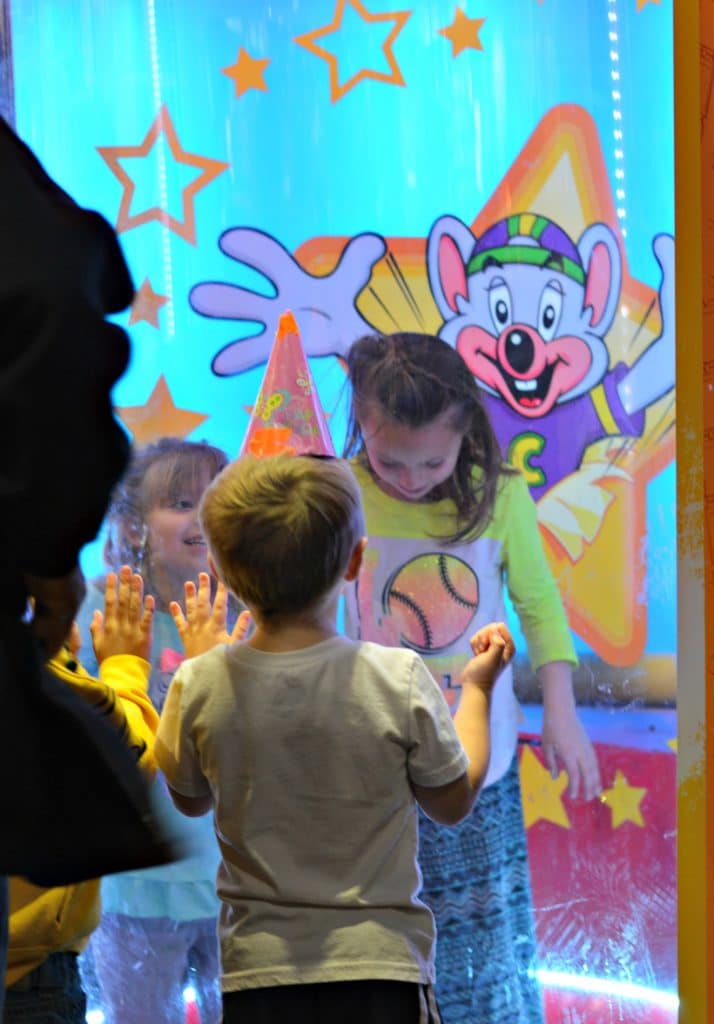 Next, the kids had fun getting to meet Chuck E Cheese himself! He came out and met the kids and took pictures with them. The kids LOVED this! 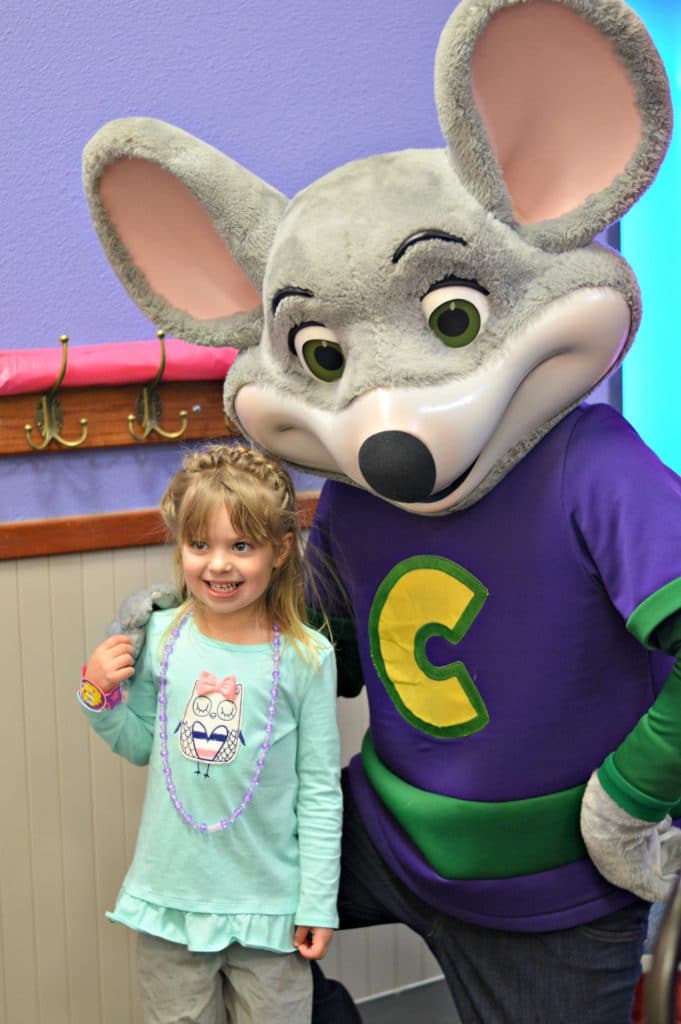 Finally, the kids all got a chance to pull on the “pull string” piñata which was filled with tons of tickets for the kids to use to redeem prizes at the end of the night. They were able to pick up all of them and every kid was able to get quite a few. 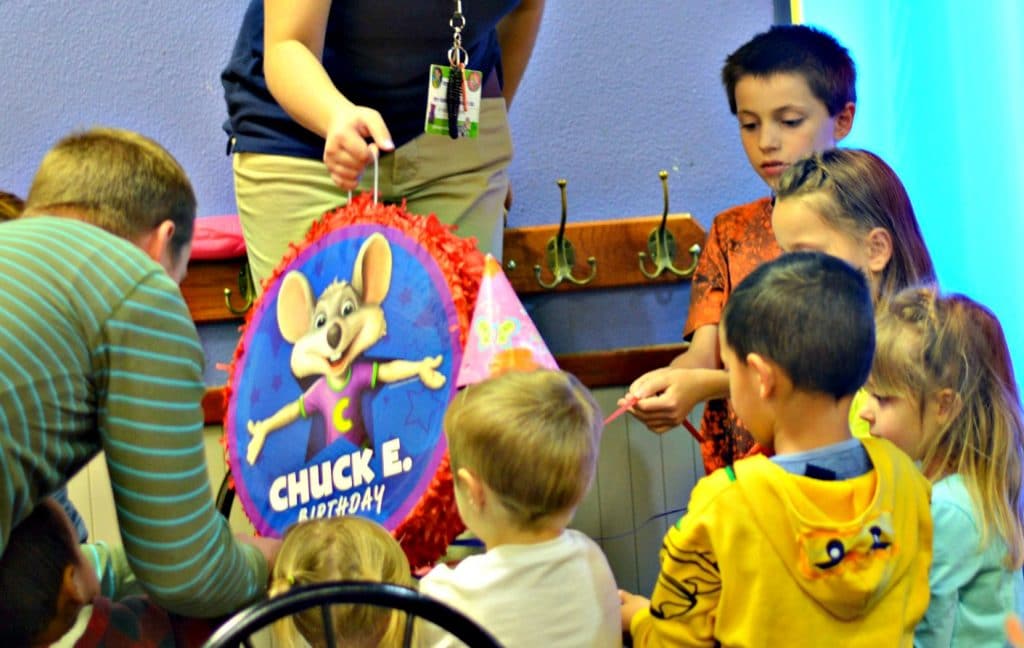 After all of the birthday activities, the kids continued playing until their time ran out and then we were all ready to go home and get some rest!

This was definitely one of the most fun birthday parties that I have been to and it was so great that everything was taken care of while we were there. I also was able to verify my friend’s comment about Chuck E Cheese’s being a great place for bilingual birthday parties. While my niece’s party was going on, there were at least four other parties at the same time and at least one of them had kids and adults speaking Spanish and other languages as well! I am definitely planning on doing this for my boys’ birthday part next year as well and I will have no problem inviting my Spanish speaking friends to come as well knowing that they will be able to participate fully as well!

All in all, this was a great party and I definitely recommend it if you are looking for a great party idea. If you have a party coming up, click here to get more information and make your reservation – I recommend trying about two weeks in advance to make sure that you have the best dates available for your party.

Let me know  your thoughts in the comments below!