Inside: Learn how to make this delicious and popular Mexican Birria recipe that is commonly served at celebrations. Birria is authentic and addicting and will be leaving you asking for more. 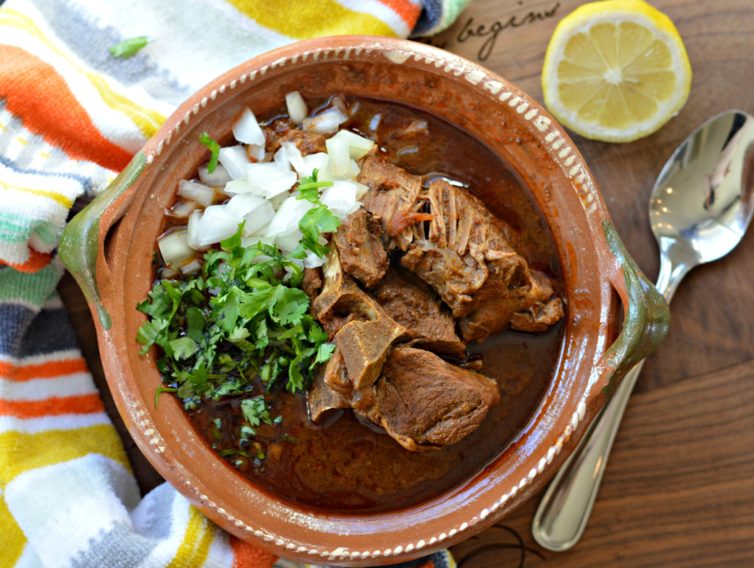 Birria is a popular Mexican dish that originated in the Jalisco state. It is traditionally made with lamb meat, but it is common for people to use beef today since it is more affordable and easier to find throughout Mexico and the United States.

There are a few different ways to enjoy Birria. The first is as “consome” which is a type of soup, or stew using dried chiles and other spices. For that variety, the meat is shredded and served in the soup. That is why it is important for the meat to be cooked until it is very tender. 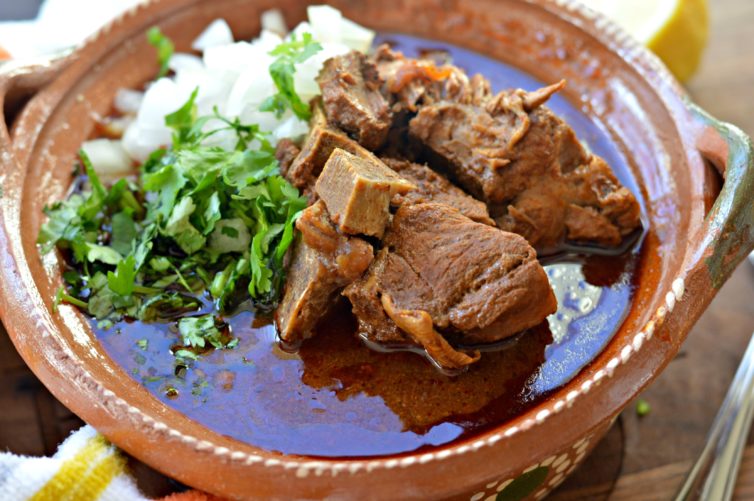 The consome is served with diced onion and cilantro, salsa, and lime juice. It is popular at baptisms, weddings, and holiday parties. Birria has gained international fame, not only because of its exquisite taste, but also because it is known for its ability to help people recover after a long night of partying.

Another way to eat birria is to shred the meat and make tacos with it! Both ways of using it are delicious, but my personal preference is as tacos. You shred the meat, heat up the tortilla and dip it in the broth before adding the meat and serving it with onion, cilantro, salsa and lime. 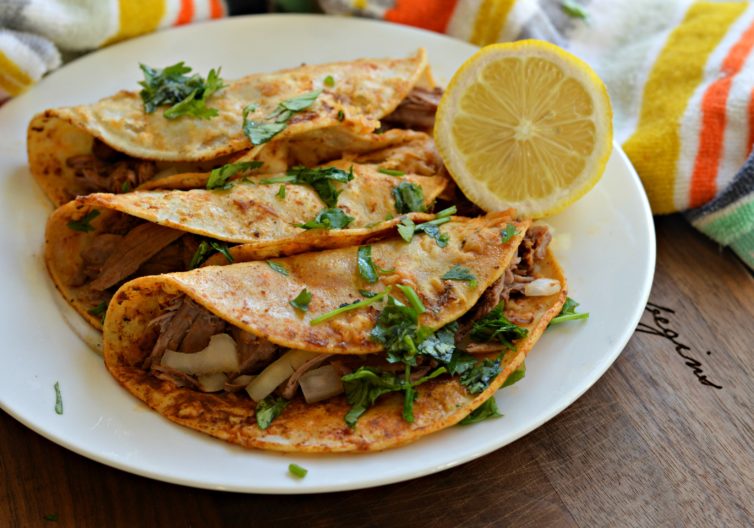 How Do You Make Birria?

Birria is made with lamb meat or beef. Most often, rib meat is what is used from the lamb, and the shank for beef, but you can use other cuts as well. You start by marinating the meat in a combination of guajillo, ancho, and chipotle peppers. You will also use spices, such as cumin, thyme, oregano, marjoram, and cloves. Marinating allows the flavors to really penetrate the meat, which results in a tender and delicious final product. 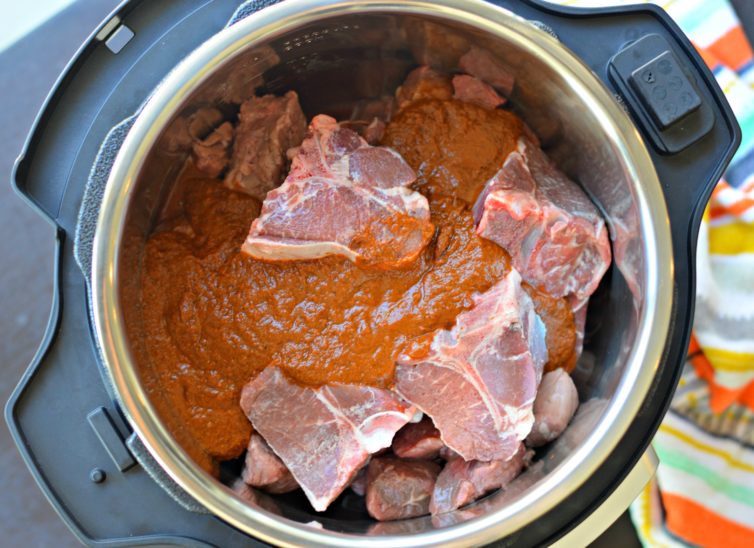 Although Birria is delicious, the traditional preparation takes some time. The traditional way to make birria is to let it cook in a large pot for 2-3 hours at least, checking it often to make sure it was cooked correctly. Fortunately, the tecnology that we have today helps us so that we can make it more quickly without sacrificing flavor! 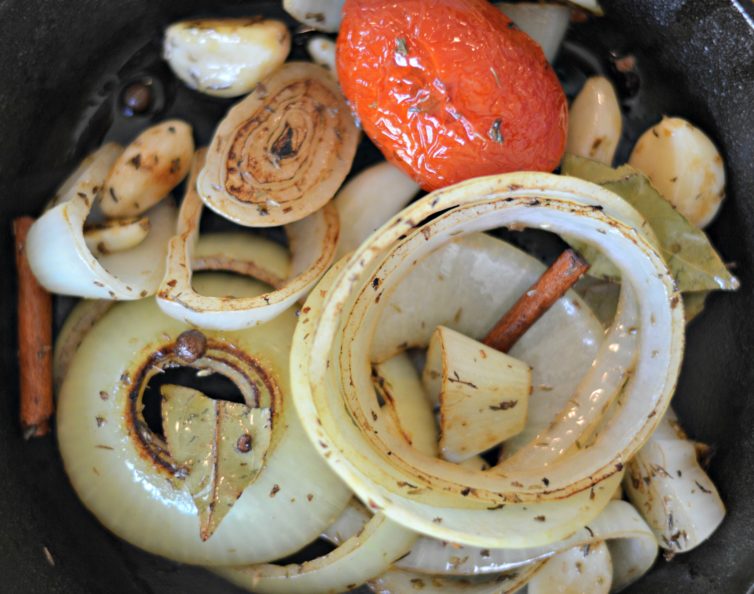 One of my favorite memories growing up was watching my abuelita as she made birria and other recipes with patience and love. Even still, I think that she would have loved to have one of the electric multi-cookers that are so common now. In this recipe, I will show you how to make it using one of these great tools and also in the traditional method.

How Is Birria Served?

As I mentioned above, consome de birria is very popular and you make it by adding extra broth and then adding lime juice, salsa, cilantro and diced onions. 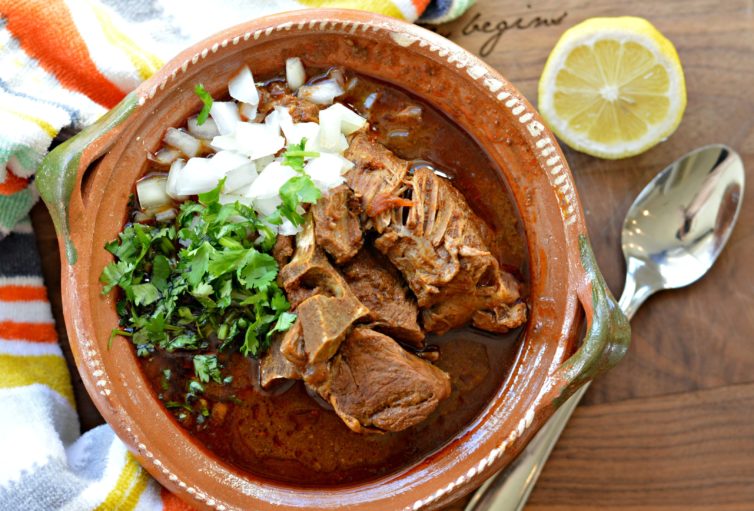 For tacos, you will start by heating up or frying the corn tortillas and then dipping it briefly in the cooking broth from the birria, which gives it flavor and some extra color. Then you fill it with the shredded birria meat and top it with onions, cilantro, salsa, salt and lime. 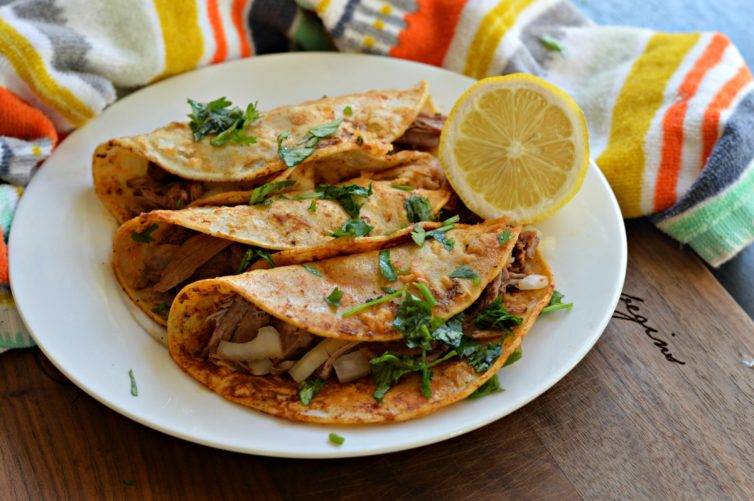 No matter how you serve it, it is delicious! Let me know in the comments below how it turned out for you and if you have any questions about the process! 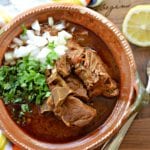 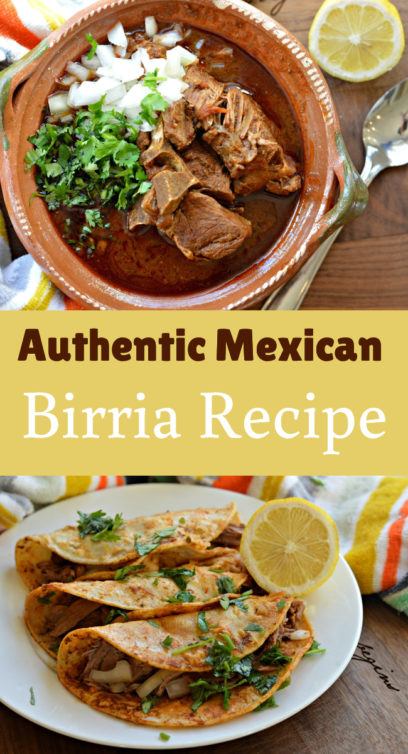 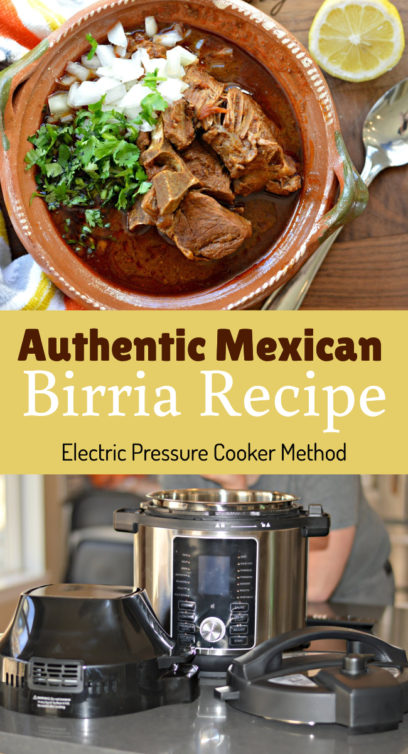 I made this today… in the slow cooker… I added corn and rice and made it a soup garnish was sour crème, lime, cilantro and corn chips! Delish!!

Made this recipe so many times. My husband is from Veracruz Mexico, I was born and raised in the Bible Belt, and from time to time he will ask me to make him some really challenging authentic recipes. This is one that was easy to understand and repeat. Even my mother-in-law loves it!

I am very excited to try this recipe and browse the other recipes on this site. I'm glad my Google search directed me here. I have a few questions. 1. What kind of chipotle pepper do I use - dried or canned in Adobo sauce? 2. Could I use pork? If so, what cut of meat would you recommend? I plan on trying this out this weekend and can't wait.

@Charbel Barker, Thank you for the reply! I ended up using a Boston pork butt as that was what I found at the store. I am happy to report your recipe is great with pork. I love that you have instructions for the Instant Pot so I didn’t have to convert it. I served it as tacos with consommé for dipping and my son add them for lunch and supper even though it was a little spicy for him. Any recommendations if I need to turn the spice down next time? Thanks again! Paula

Hi Paula, Thanks for checking out this recipe! You should use canned chipotle in adobo. I have never used pork for this, but I don't see why you couldn't. I am not sure what the best cut would be, but probably something like pork shoulder would be good.

Hey I really want to try this and I am wondering if I can substitute the meat for jackfruit? And if so, how much should I add?

Tried and true recipe. My go to! I just use a bit less water and more meat so I can make quesa tacos